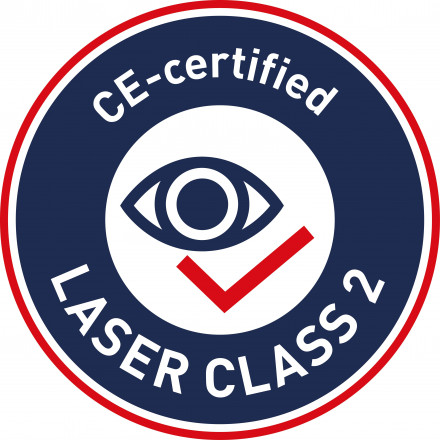 If you go for a JustLaser Large Laser Cutter, you’ll always be able to rely on a product that conforms to the highest safety standards – those concerning the laser classes in particular as it is officially certified as laser class 2 when it comes to cutting organic materials.

Due to their output and the associated risk of injury to eyes and skin, care should nevertheless be taken when dealing with laser devices. Not least because of this, lasers have been divided into internationally-valid safety classes, which entail specific safety requirements and legal requirements depending on the laser’s output. The higher the laser class, the stronger the safety equipment and the more limited the practicability. With its innovative products, JustLaser makes it possible to unite top safety standards and ease of use in one laser machine.

Laser beams can, if shone in someone’s eyes, cause irreparable damage to the retina or cornea, and may – as a worst case scenario – even lead to blindness. Skin reacts to the wavelengths emitted by a CO2 laser (main emission line at 10.6µm) – depending on the power and interaction duration, burns may also occur. As a result, it is necessary to take appropriate protective measures depending on the laser output, which is why laser machines have been subject to mandatory labelling in the form of classification ever since they started being used for industrial applications.

There are a total of four classes (as well as subclasses not described here), ranging from class 1, which contains harmless lasers, to class 4, which contains lasers with the greatest hazard potential. The decisive factors for assignment to a specific class are laser output, wavelength and the resulting safety regulations.

LASER CLASS 4 AND ITS DRAWBACKS WHEN IT COMES TO PRACTICABILITY

Laser machines for materials processing must always be assigned to laser class 4 based on their wavelength, power density and potential indirect risks. Due to the safety regulations to be complied with, there are often restrictions when it comes to operability and process flow. While an open design doesn’t provide sufficient protection against laser beams, fast workflows, simple operation, flexibility and process control cannot be guaranteed with closed designs. In addition, full enclosure of the unit should not be underestimated from a spatial or economic point of view – structural measures are often necessary here in order to be able to put such a unit into operation.

The modern and efficient Laser Cutters from JustLaser provide a welcome solution and combine statutory safety standards with best practice. Furthermore, JustLaser is the only company on the market to provide laser machines in this class (open large-area laser cutters) which are officially CE-certified in laser class 2 – in normal operation and in compliance with intended use. The latter in particular means that no metals may be used as they result in strong reflections. Organic work pieces on the other hand can be processed in compliance with laser class 2.

Our JustLaser Laser Cutters are constructed in such a way that class 4 areas are protected by covers or special devices. Covers which can only be removed using tools are clearly labelled with a warning sticker. This ensures that laser operators are effectively protected from all the beam parts of the processing laser, as well as from reflected or scattered beams from the processing laser. This is possible without housing, i.e. simple feeding. This makes it possible to comply with class 2 in normal operation (i.e. NOT in service mode, which can only be put in place by service personnel), which means that operators can always work safely when used as intended. However, there are still indirect risks (e.g. risk of fire) and possible dangers from pilot lasers (<1mW, 650nm).

Thanks to their special design, the Laser Cutter from JustLaser offers maximum safety against, direct, reflected or scattered beams from the processing laser, without hindering or complicating work processes through safety devices (casing in particular). The laser class 2 (for organic workpieces) or 4 (for metallic workpieces) JustLaser Laser Cutters not only comply with top safety standards, they are also optimised in terms of operability and process flows. As a result, there are significant benefits when it comes to flexibility, handling and economic efficiency:

Whether it’s laser engraving, cutting or marking – you can benefit from the efficient, diverse, profitable and safe laser machines from JustLaser and the decades of experience of our team of experts. At JustLaser, we offer quality that you can trust!

DO YOU STILL HAVE QUESTIONS ABOUT OUR LASER CLASS 2 LASER CUTTERS?

Our JustLaser experts will be happy to answer any questions you may have by email.